Did you know,
That in 1252, on small, overlooked area in the St. Gotthardt's Church square, the first school in Brandenburg was founded. It was called the "Gelehrtenschule" (Secondary School) or the Latin School.

This school initially served only a religious purpose for St. Gotthardt's where they learned reading, writing and basic lessons in the Latin language of the Church, singing, etc. It was under the leadership of one of the Church appointed headmasters. .

One early headmaster whose name is known was Claus Bredow. Presumably under his leadership the students were introduced to a larger two-story school building in the year 1385 which stood opposite the church tower of St. Gotthardt. 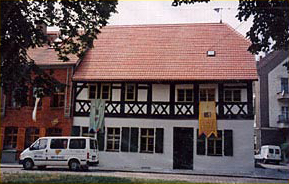 This building, today at Gotthardtkirchplatz Number 5, has preserved the historic building through a reconstruction done in 1552 and is still there today. It is Brandenburg's oldest former school building and also the predecessor of the Saldern school.

In 1589, Mrs. Gertrud von Saldern, a widow of the electoral Finance Minister Matthias von Saldern, gave the the Bishop's courtyard in the St. Gotthard's Church plaza to the city of Brandenburg for the honor of God and the preservation of the Protestant word.

A stone tablet with the name of the foundress and the coat of arms of the von Saldern family were placed over the door of the building. Before the old Bishop's courtyard (formerly the accommodation of the Brandenburg church dignitaries) could be used for school lessons, a renovation and extension were necessary. This was completed in 1591.

Despite many disputes, usually of the financial sort, after the confusion of the Thirty Years War and under efficient leadership, the "Salderische Schule" grew to great popularity. Many highly educated and scholarly men of the church and state were educated there.

Certain highlights of the instruction were performances of school comedies whose desired effect helped avoid juvenile shyness and elevated the self-confidence of the boys.

The school discipline and rules were regulated by special school laws and adherence to these laws was enforced extremely strictly. For example, no one could miss the specified service in the church and above all "Sundays and holidays, the student should use the time for relaxation or feast and therefore miss the church service, but rather listen attentively to the sermon."

Despite all regulations, the youth rebelled and threw off their chains, which may be a surprise due to the strict discipline. Thus the school supervision complained in the year 1594 that the choir students "often hold private meetings, waste the money, and probably drink beer until they swarm up and down the roads in the middle of the night and disturb the peace."

In the time from 1622 to 1706, the Saldern School ran into a crisis and came close to closing. Constantly changing and not always competent Rectors and teachers, low numbers of students, poorly paid instructors (and therefore not efficient), and endless disputes among colleagues with the inspectors wrecked the school.

In 1713 the canon of the church of Brandenburg, Mr. Ludolf Ernst von Strantz, began to favor the Saldria. An important school man was appointed as rector (Johannes Caspar Carsted) and scholarships were given again. Later the old buildings were restored.

The school grew and prospered! Soon a strong supply of noblemen attended, though in the meantime there was a "knight's academy for the education of the young gentry of the Mark of Brandenburg" founded. Despite the imminent instruction to accept and send no more noblemen to the knight's academy, the school continuedto increase in size and in 1736 had the highest number of students.

This upswing stopped however after a short period and in 1790 it was decided to combine the Saldria (in the meantime called Lyceum) with the new city Gymasium (secondary school). It kept the name "Saldernsche Bürgerschule" and consisted of the Altstadt's Bürgerschule and the Gymnasium in the Neustadt.

In 1817 that was all in the past, and by a ministerial decree from November 2, 1817 the "Saldern Schule" was separated from the other Gymnasium and was a completely independent school again.

From 1818, it called itself the "Saldernische höhere Bürgerschule" with instruction in 4 classes. The number of students increased. The increase of school funding led to better salary for the instructors.

In 1835 the Saldria united with the "Altstädische Knabenschule" or the Altstadt Boys' School, but due to increased costs and other difficulties, it was not a permanent condition.

In 1838/1839, the Altstädische Knabenschule separated again from the Saldria. At Easter, the new rector opened the reorganized institute of the Saldria with 6 classes, a new curriculum and selected teachers:

Through the increase in students from 209 in 1843 to 347 in 1850, the Saldria reached again for the first time after 200 years the prosperity of the days in the Bishop's courtyard. By the appointment of subject teachers (an important origin), the Saldern school was recognized again as a higher institute and on April 7, 1852 received the name "Realschule".

Since the school was soon bursting at the seams, a new school building was inaugurated at the Salzhof on the Havel River in 1867. 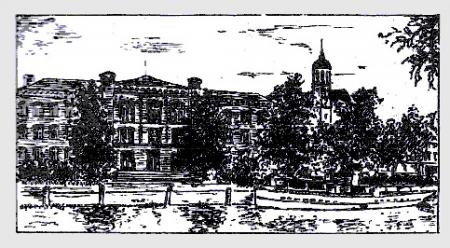 In 1882 the institute was promoted to a "Realgymnasium"

By the way, the Saldria never received its own sports gymnasium. It always had to share with other schools.

When the Saldria prepared to celebrate the 300th anniversary in summer and autumn of 1889, the historian of the institute and the city of Brandenburg, Professor Dr. Otto Tschirch, wrote a historical pageant in 3 pictures: Saldria in Three Centuries.

In 1925-1926 preparations for the transformation of the Saldern school and the increase in scientific subjects led to the creation of the "Städtischen von Saldernschen Reformrealgymnasium mit Realschule" or "Saldern City reform Gymnasium and Realschule".

The effects of National Socialism from 1933 to 1945 were felt also by the Saldria. The party machinery of the NSDAP made strong attempts to advertise and strengthen its circle of friends among the teachers and students.

With the destruction of the school building at the Salzhof on March 31, 1945, the Saldria officially ceased to exist